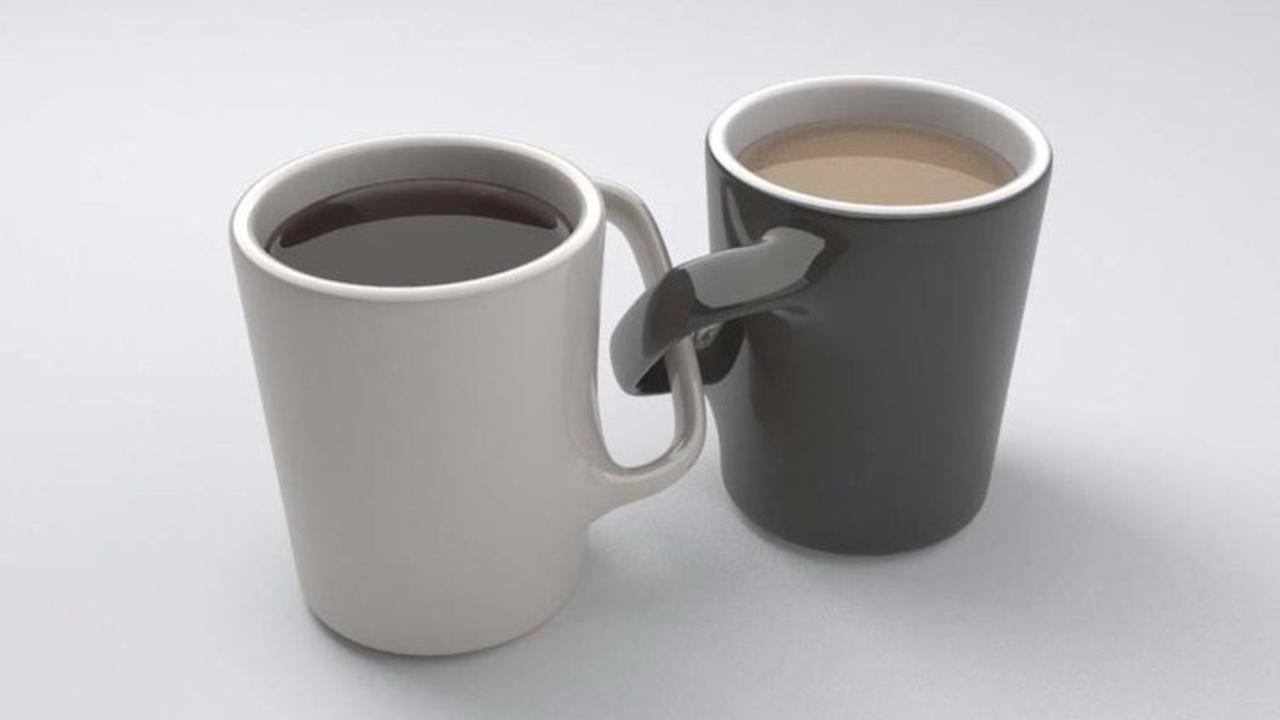 Katerina Kamprani engages failed user experiences in The Uncomfortable, a series in which she renders the inherent use of everyday objects dysfunctional. 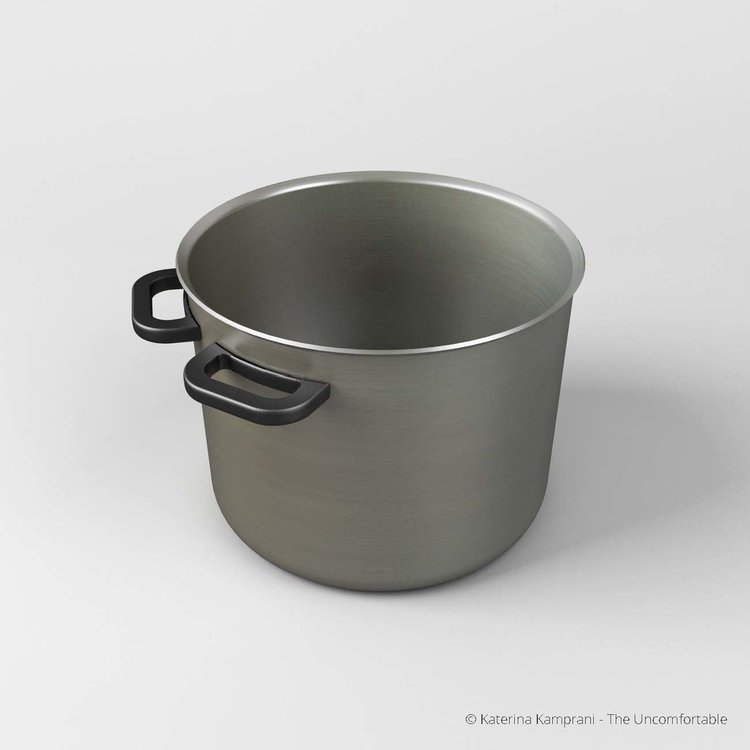 Leveraging post-graduate work in design and user experience and an extensive background in architecture, this Athens-based designer is deftly decoding functional design language.

Where does your intrigue in "un-designing" everyday objects stem from?

I was working as an architect but I always wanted to be something else. Basically, I didn't know what I wanted to do! I decided I would focus on industrial design because I really liked it, but I always liked creating projects more.

I went to do a Master's degree that had to do with Design and Interactive Systems and that sort of thing.

It was there that I learned what user experience and user interaction was.

All these things that, as an architect, I wasn't very aware of. 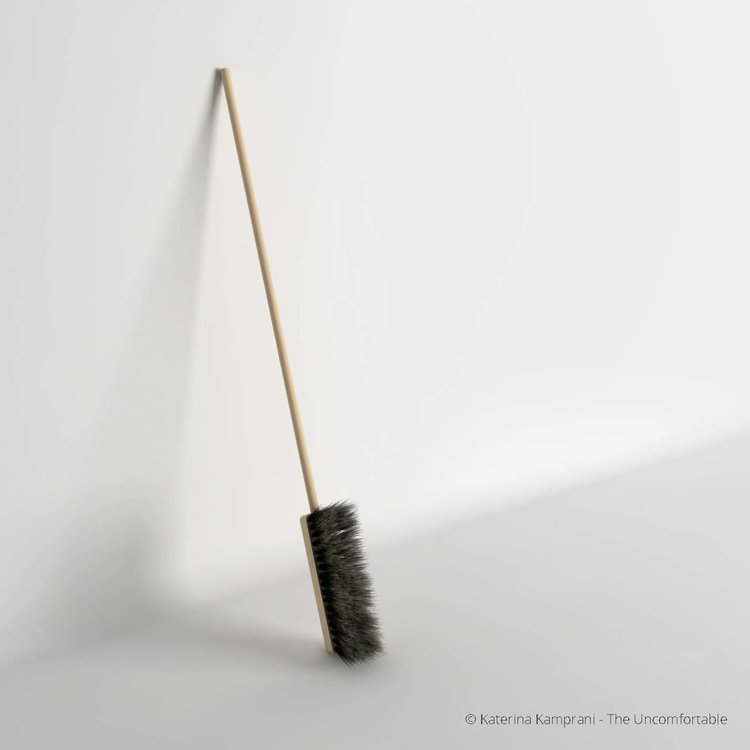 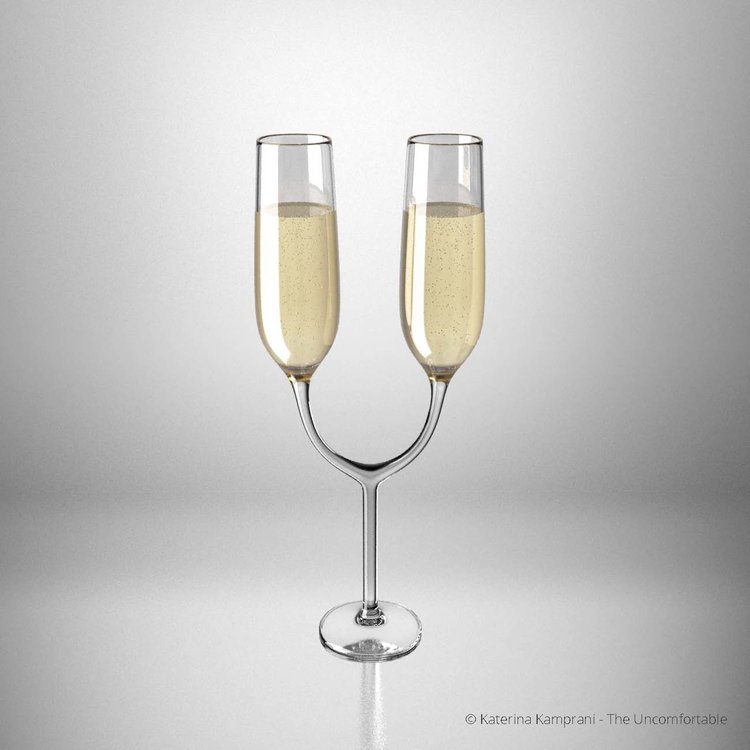 As an architect, I was working more with the form and aesthetics, but I got more in touch with how the user comes into play with design.

I was so inspired by how we interact with objects and how there can be mistakes in our interactions.

The Uncomfortable just came to mind one day. I was thinking of something that would be very uncomfortable and my next thought after that was that it would be a very nice [project] to do. It was very funny and very challenging to start to think like that. 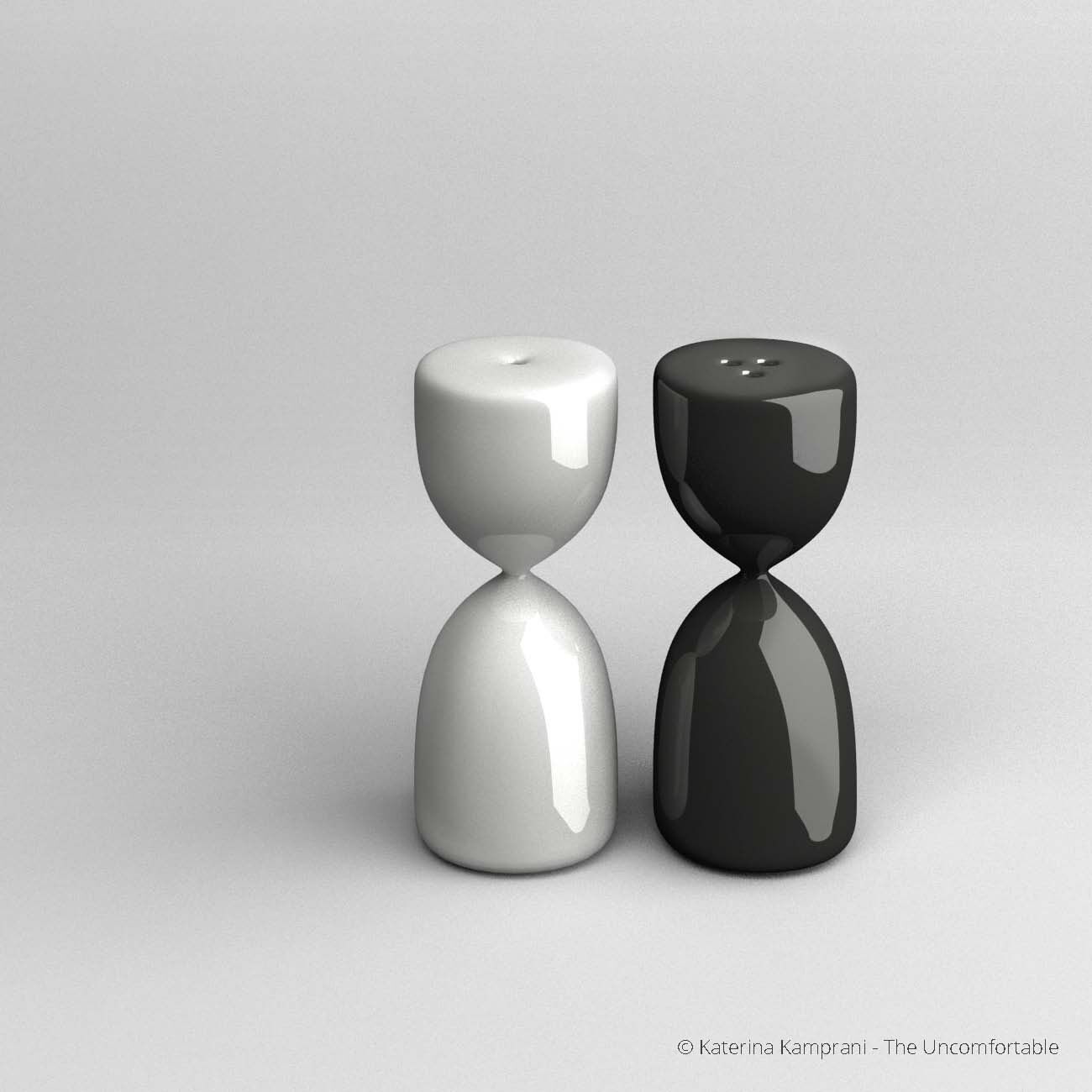 How do you identify the potential "discomfort" in an object?

I think that I aim more for surprise.

I really want the user to think that this is a normal object and then block them from using the object, but in a way that ultimately gives them a path to use it in the end.

Not to render it completely useless but just like, a teensy bit. You could try this, you could try that, but you can't do it the regular way.

Some of the objects are completely useless—which I try not to do, but they are too funny not to do them. 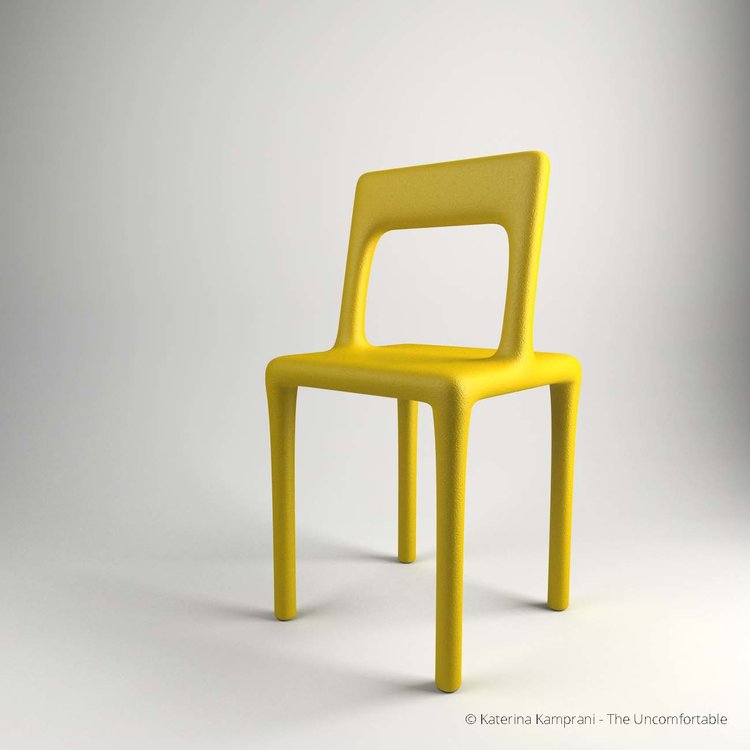 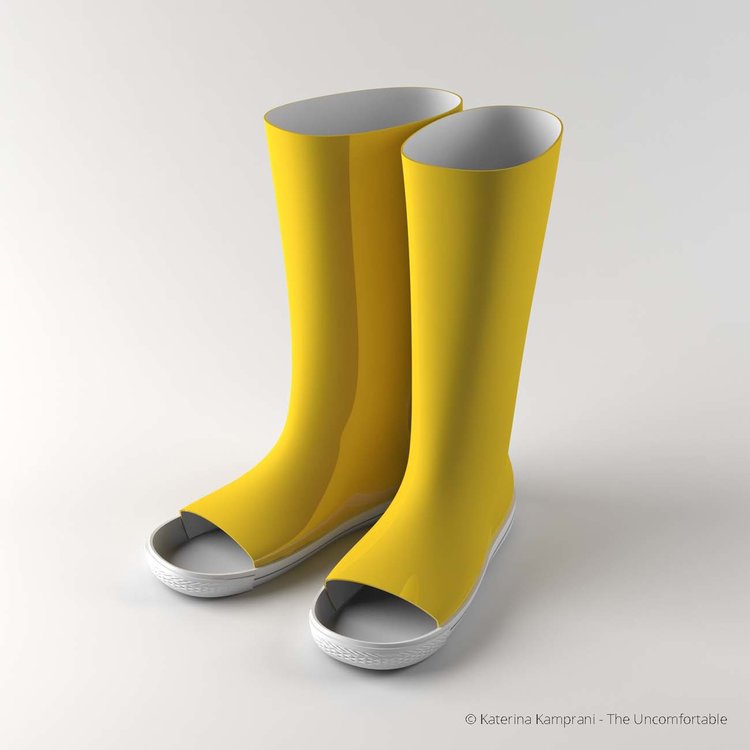 How do you approach design?

What I was taught in my Master's degree was that design is not all about aesthetics, especially objects that you use everyday.

We had a cute theory about what design was—that it's a series of actions that you do.

Like, you can design what you will eat for dinner. You will go out and buy the food, put it in the fridge, or take it out, and this process is kind of like design. 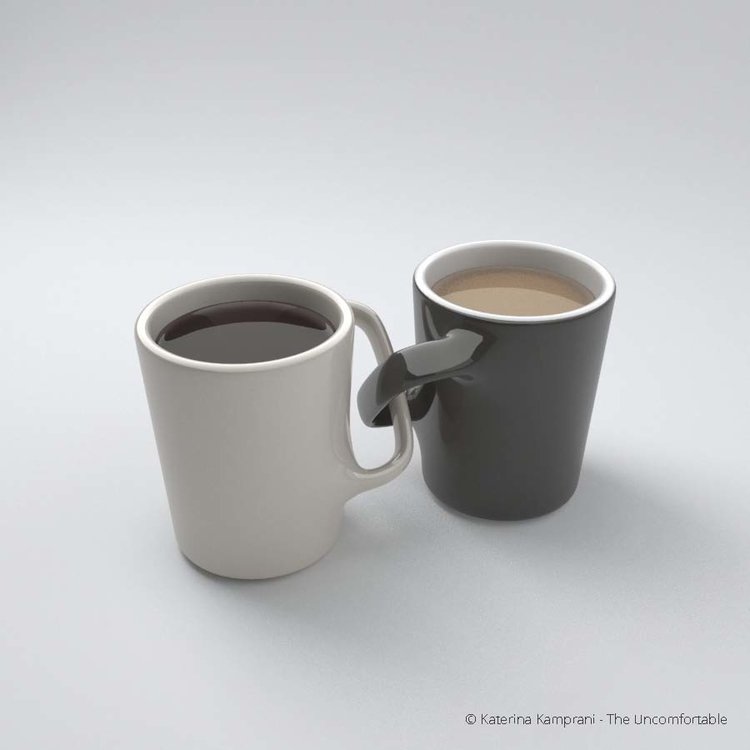 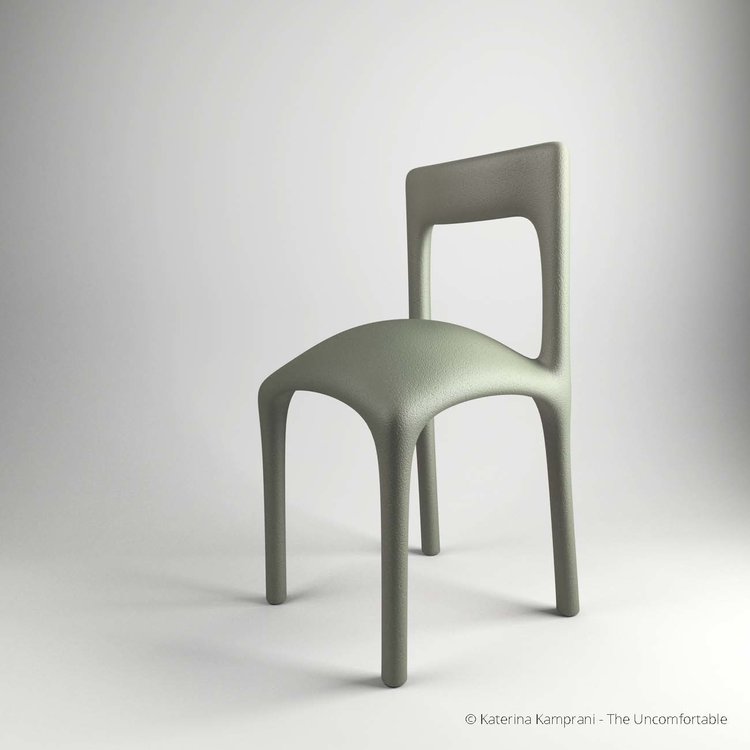 It is a series of actions that leads you to a result. It can be related to a product that you use to achieve a result, but it can be something else too, like an interactive application, or something like that. So that's how I came to deconstruct all these objects. With this thinking, I proceeded.

For me, design really really has to do with functionality. You cannot take functionality away from objects and render them so beautiful, and say, "That's nice design."

Design has to work somehow because it's art if it's not functioning. 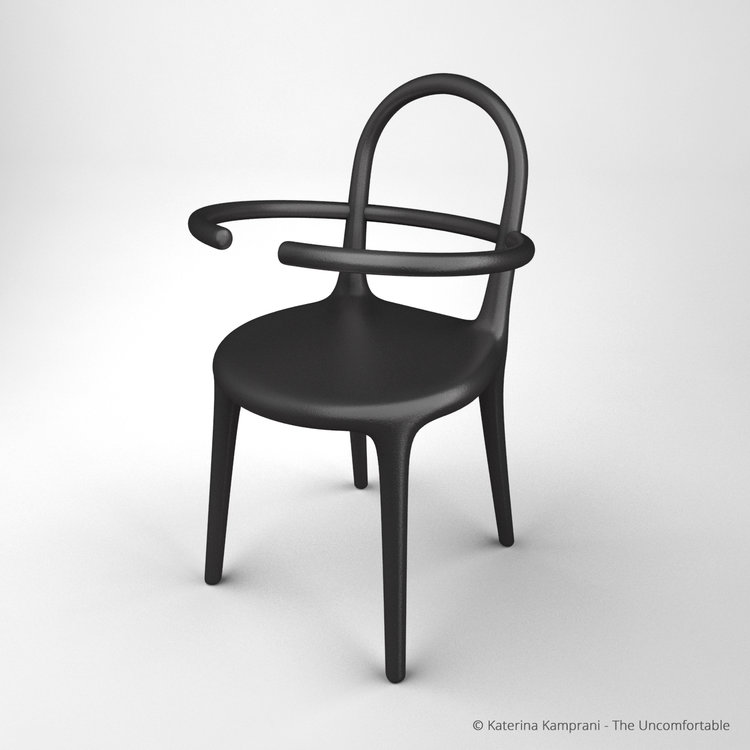 Do you consider your objects as design or art?

I don't know! I think they're art objects though. Art objects coming from a designer. I think they are kind of self-expressive in a way, but they're not focused on that. 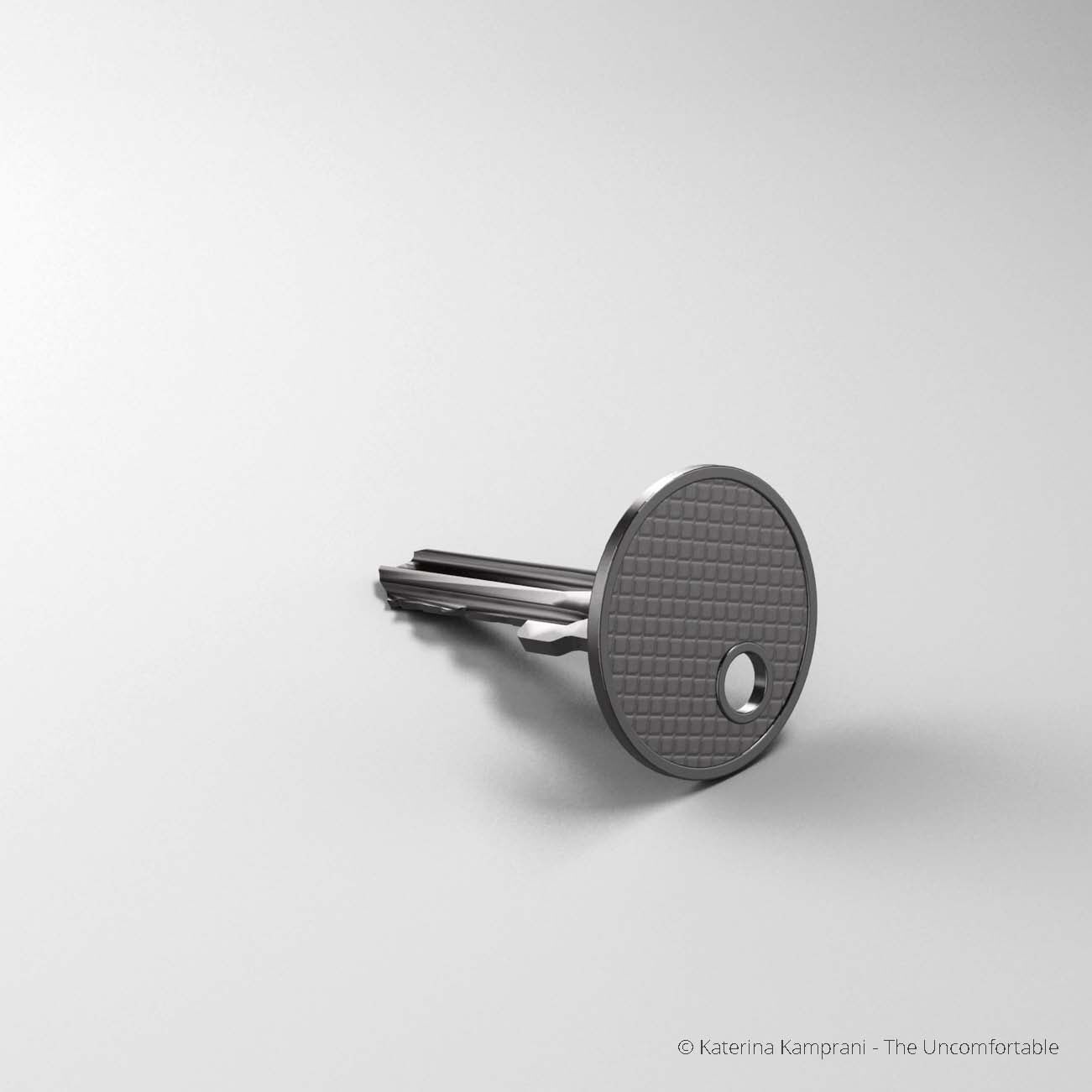 What was the process creating your psychical prototypes for Zagreb Design Weeklike?

It was challenging and really nice because I learned a lot about many different prototyping methods. I didn't have a lot of time because I was preparing objects for my exhibition in a very limited amount of time, and was running here and there.

I had been designing these images in 3D and wasn't thinking about how something would be constructed. That was an enormous mistake.

I was designing things that were very difficult to construct. 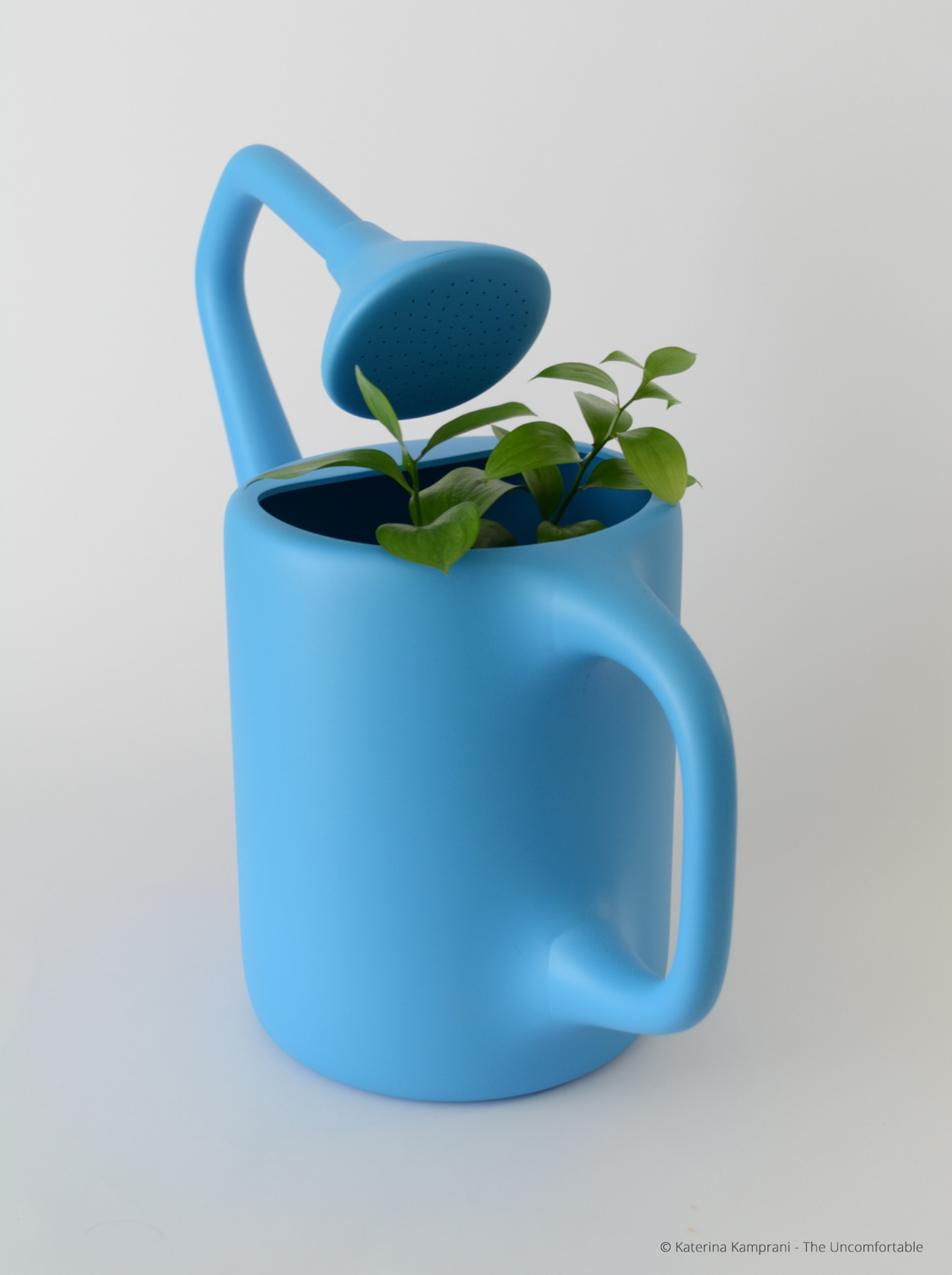 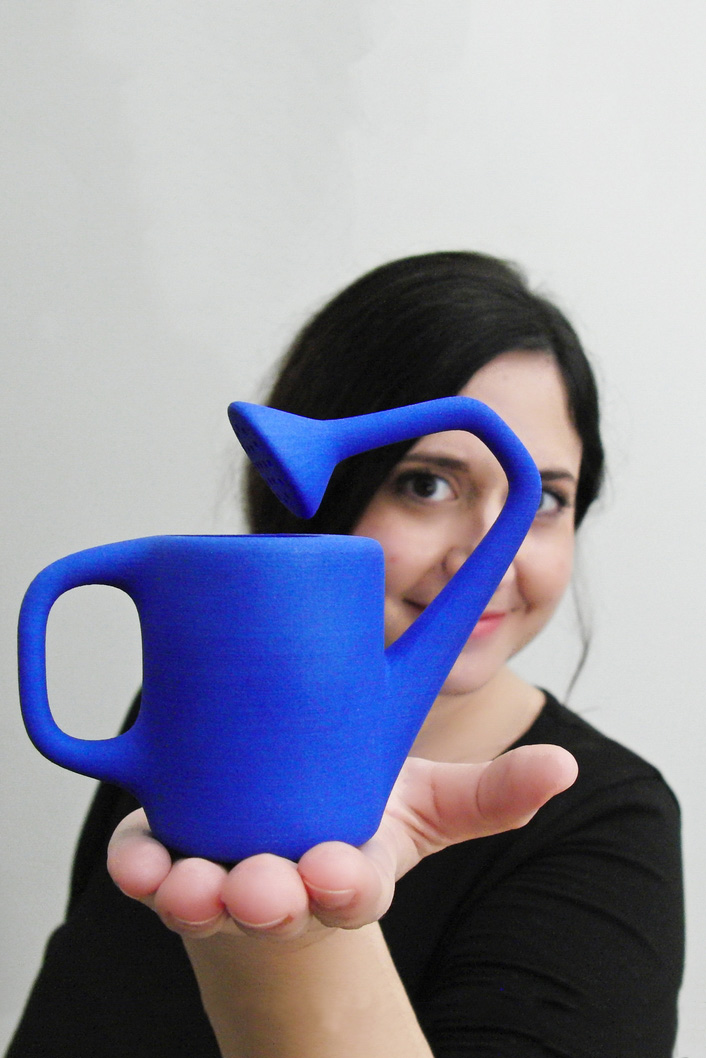 It was difficult having to think about how I would make [the watering can] from one material, how to paint it, finish it. I ended up 3D printing it in two pieces and then having it assembled.

I mean, everything is doable but the watering can, for example—it was difficult having to think about how I would make it from one material, how to paint it, finish it.

The geometry was not letting me approach it in a very easy way. I ended up 3D printing it in two pieces and then having it assembled. 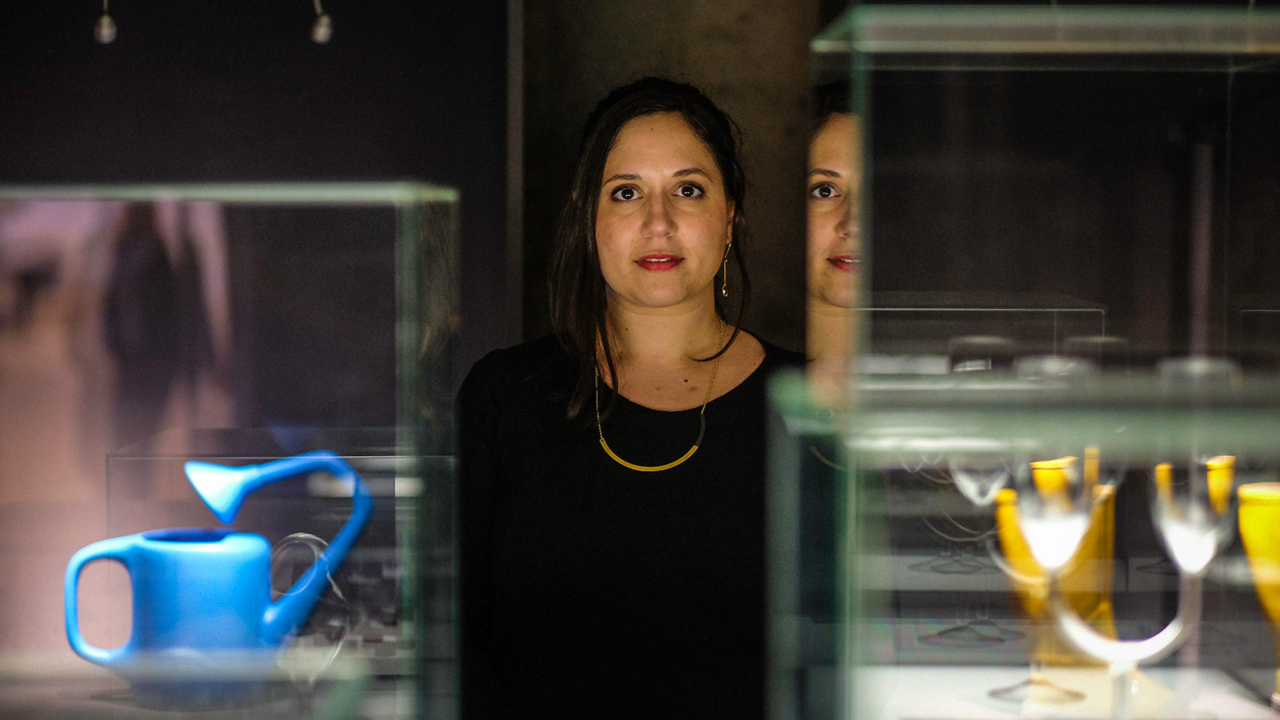 Every fabrication method had its different challenges. It was amazing seeing them physical though.

When I first started the project I was thinking these images work very well as images, and that there was no need to make objects because, A) it's expensive, and B) it's just a project and it doesn't need to be that serious. 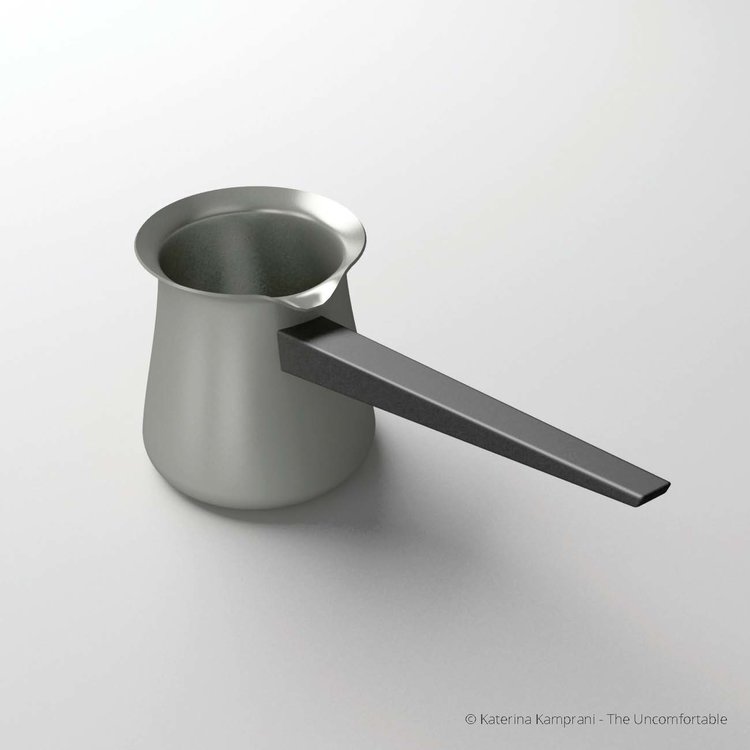 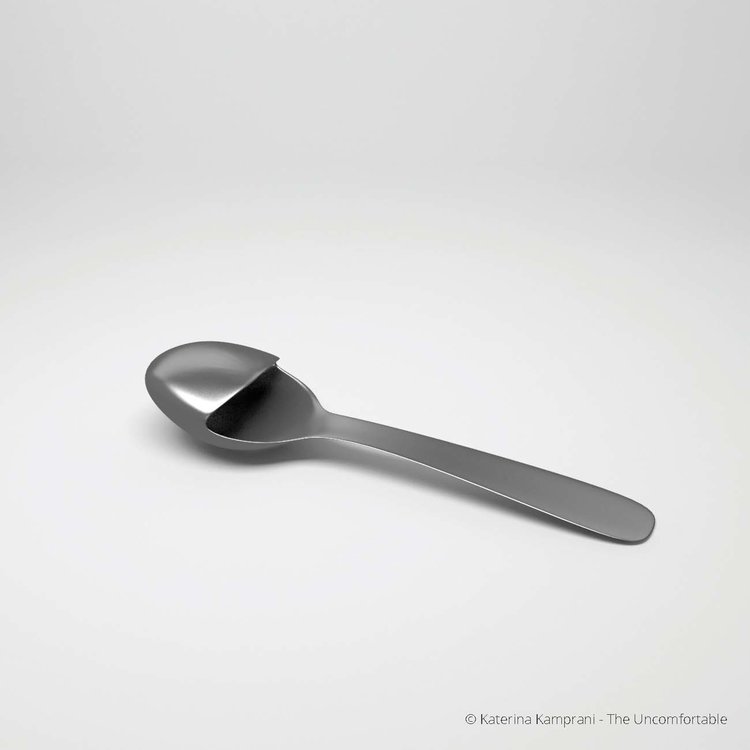 When I finally decided to make the prototypes, it had been such a long time that I'd been looking at these objects as images again and again and again.

When I finally saw them in physical form, it was very exciting for me.

I was very happy, and I was able see how these objects could potentially be used.

Like, I have this wine glass that looks like a bubble and has a hole, and we figured out that you can drink from it quite comfortably if you turn it on it's side like a chicken leg. 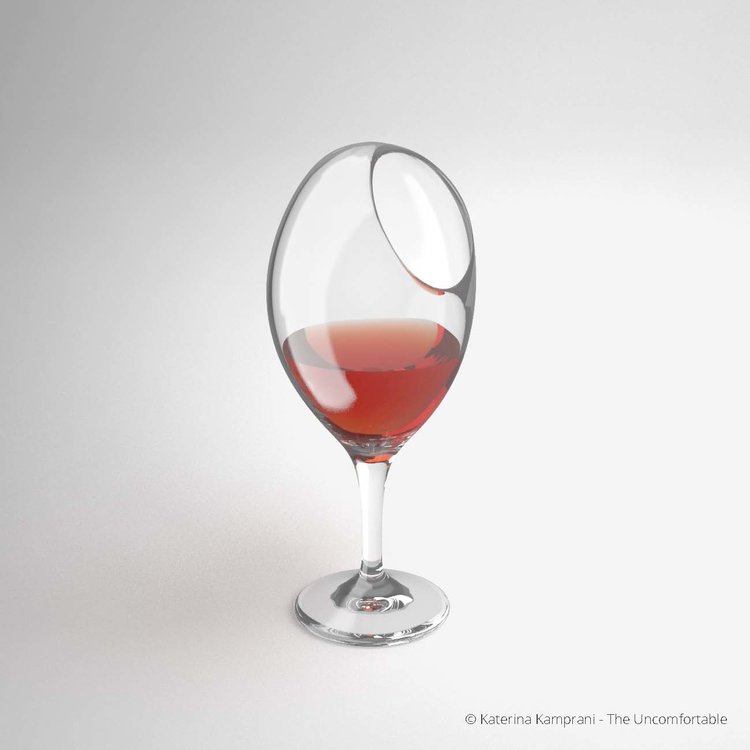 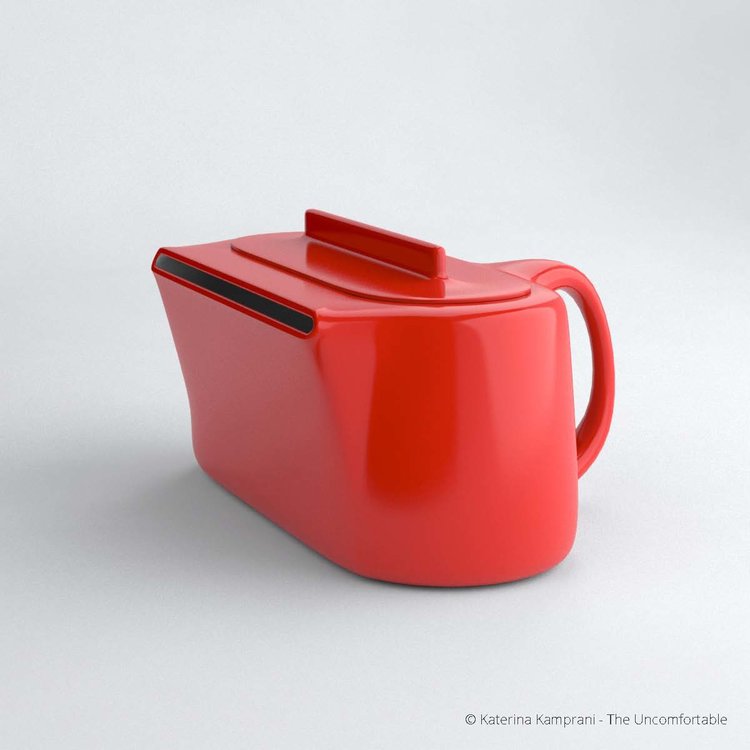 Are there any objects you have been unable to subvert?

Yes! And I don't know. Maybe it's because I have set rules for what I want to do.

One of the rules is that the object has to be recognizable.

One of the rules I have is that the object has to be recognizable. There are some objects that are so simple that one simple change. They are not the same anymore, they are not this object anymore. 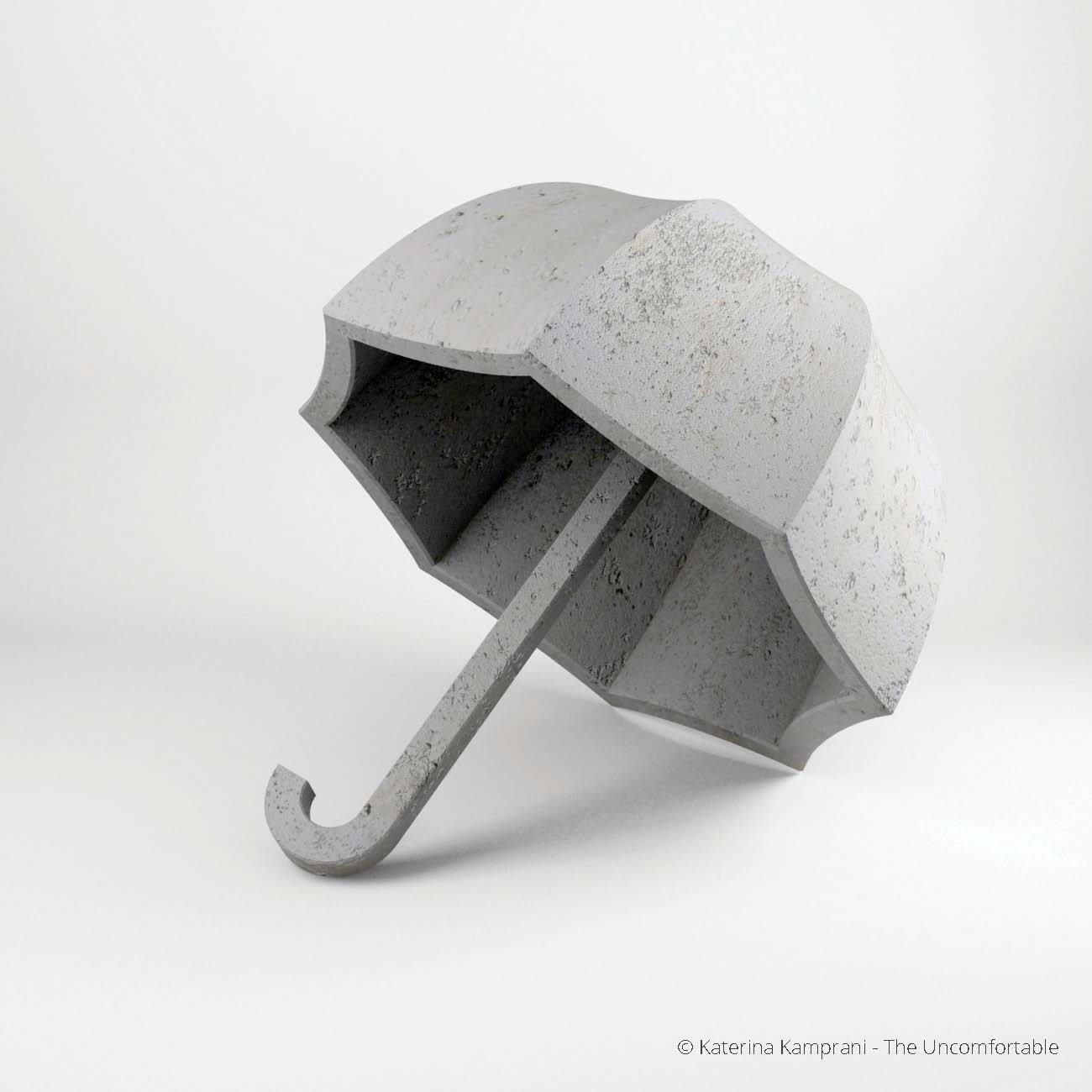 I haven't been able to make an uncomfortable dish. I have thought of many funny things but nothing is good enough for me!

Tables, plates, light bulbs too—at one point I was trying to figure those out.

There are some objects, like the dish and the table, where I just haven't found anything hilarious. It has to be uncomfortable and it also has to be funny. But first, it has to be an image of an object that is understandable. 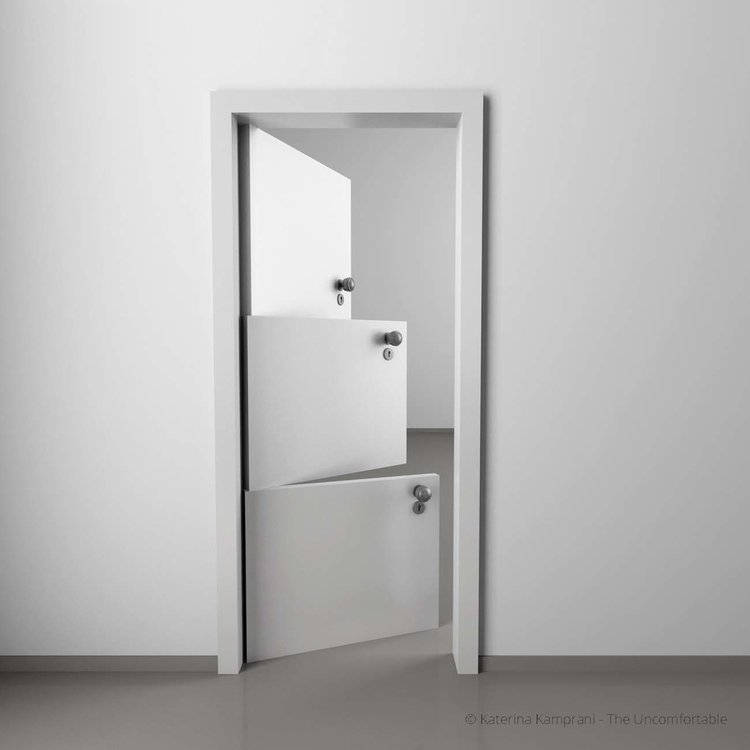 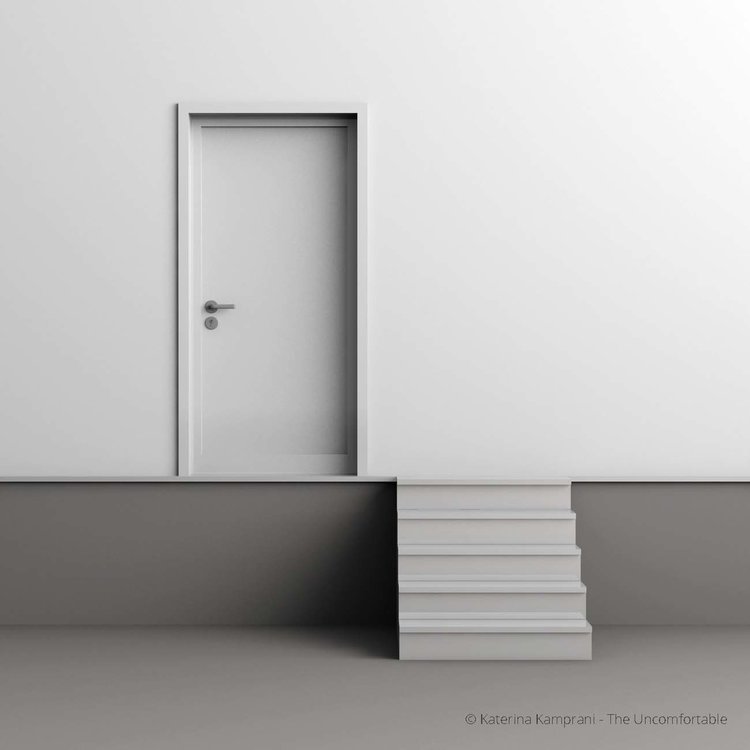 What do you think the impact of this project is?

Who knows! I started doing this because it was fun. For me, it was a way to have a funny project and be free to express myself. To have my own project, to make me think outside the box.

It was a challenge—of trying to think, keep me busy, entertained, and I didn't have a goal.

I didn't start this project and say, now I'm going to do these objects so that people can understand how important uncomfortable objects are!

No. But I think because I already understood through my education in university that these ideas are important, and maybe I was working that out in my mind.

I have many requests for using [the objects] in education for teaching, or showing examples of user experience or design, or for small kids to learn to work outside the box, think more creatively. It is amazing.