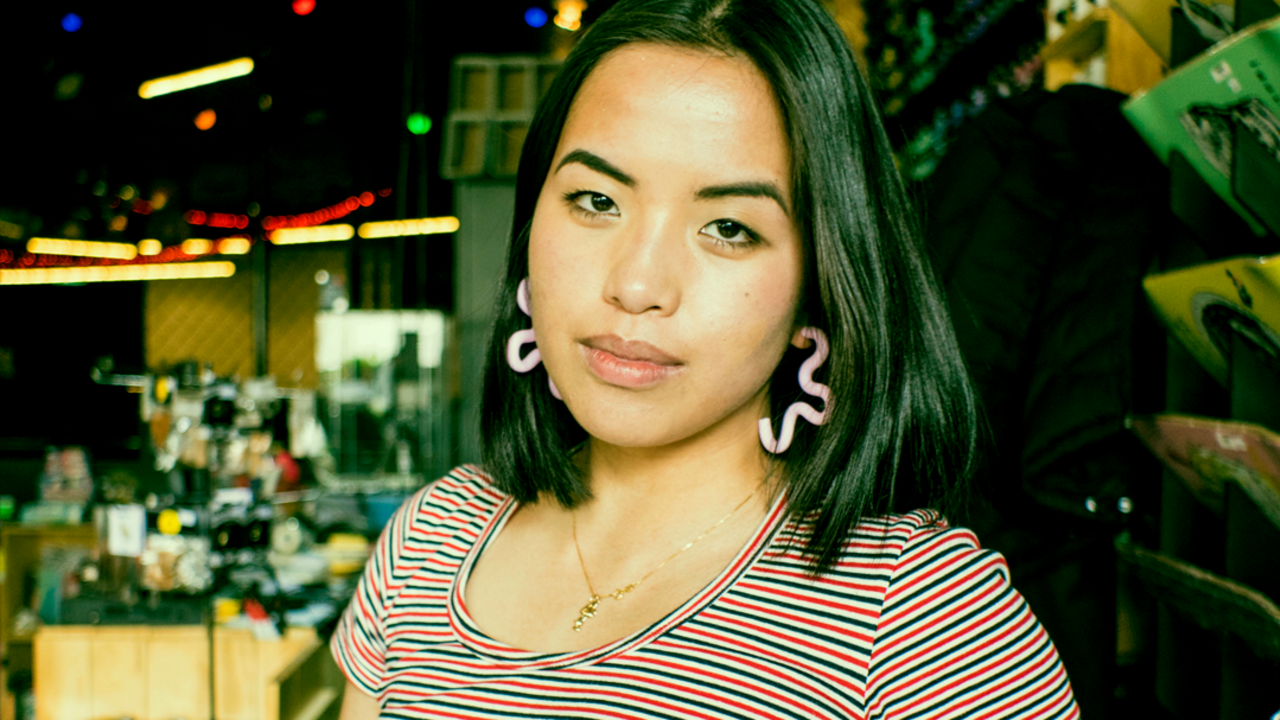 Formerly known as Mr. Manok, Agno is a visual artist, illustrator, and graphic designer now working under the guise of Cream Team.

Your work gives me warm fuzzy feelings, but it's got this subtle edge. How would you situate your stylistic tendencies? Who or what informs your work?

I have a bunch of different sources for inspiration. It's never one specific artist, or genre, or thing. I always keep an open mind.

My brain is a very haphazard place. I like to float around like a garbage bag and collect visual snapshots of things that are interesting to me. It could even be normal everyday things like a bowl of cereal, a lemon-shaped rock, or anything that is colorful, shiny, fluffy, visually chaotic, visually garbage, actual garbage, or just things that make me laugh.

Music is also a huge influencer for me. I absolutely adore Tyler The Creator, Father, Frank Ocean, Kali Uchis, SZA, The Internet. They're all on some magic wavy carpet and all of their aesthetics are so tight. 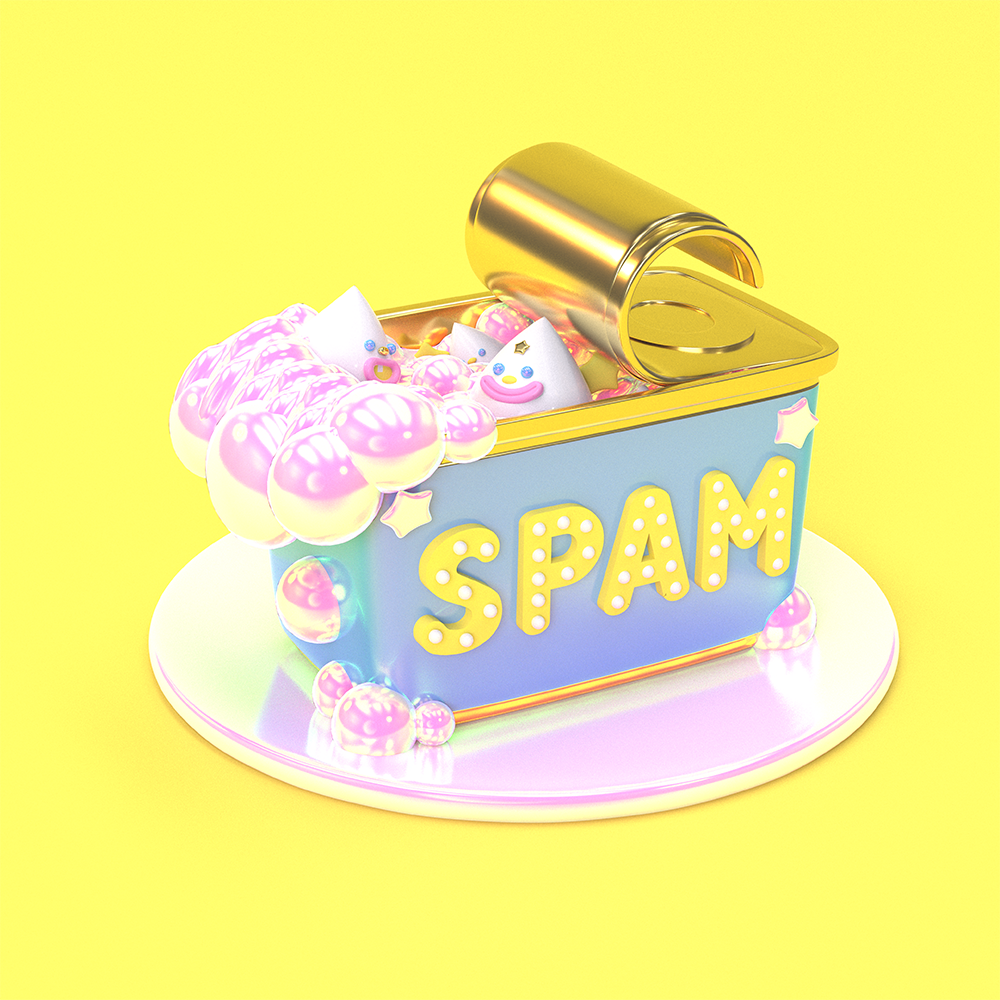 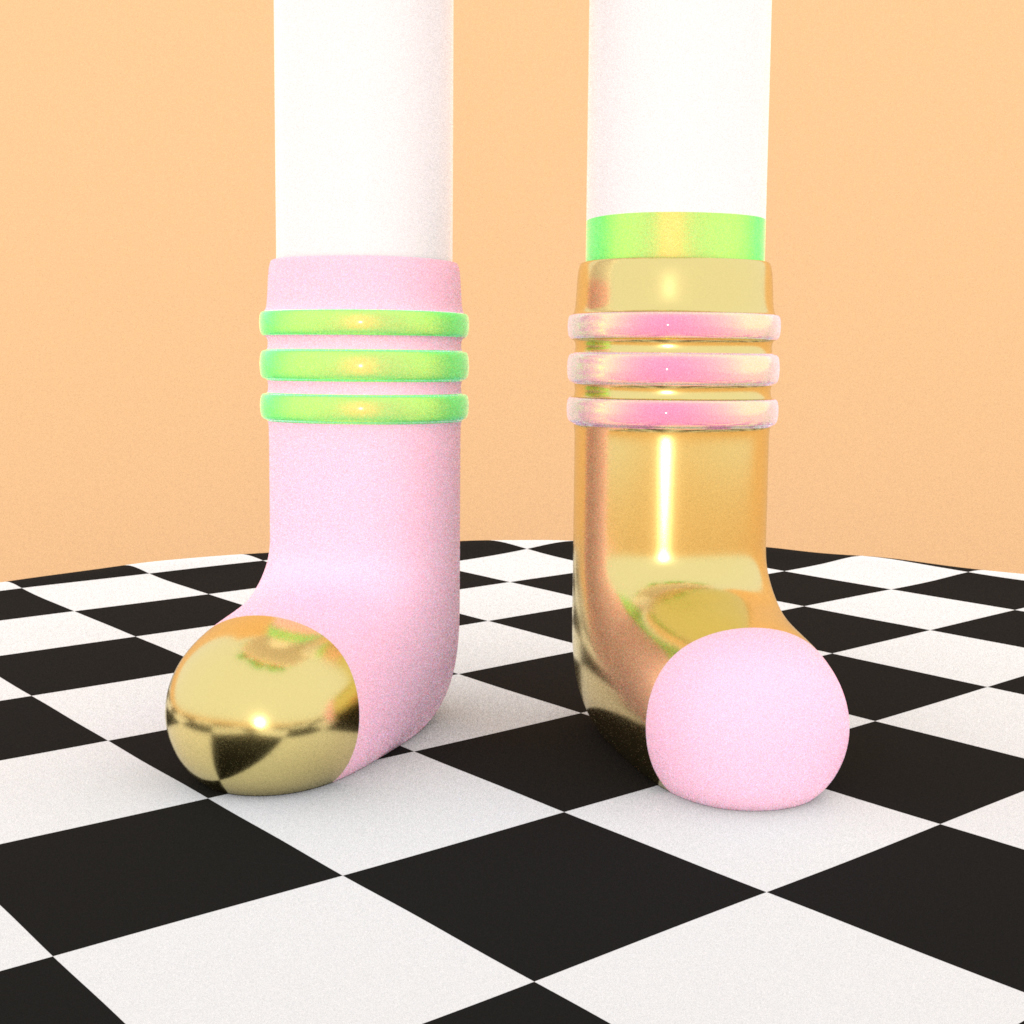 I've followed these artists for a while and it's been cool to see how their styles and visual tastes grow and evolve. It's beautiful. I always like to listen to music when I create and I usually end up draining my internet watching music clips.

I could go on for ages about the artists that inspire me, but If we want to talk 3D I would say that I have art crushes on Julian Glander, Jack Sachs, and Becky and Joe. Their work is what influenced me to take a dip in the computery-verseand it's honestly been the best thing for me creatively. I'll swim in it until I drown. 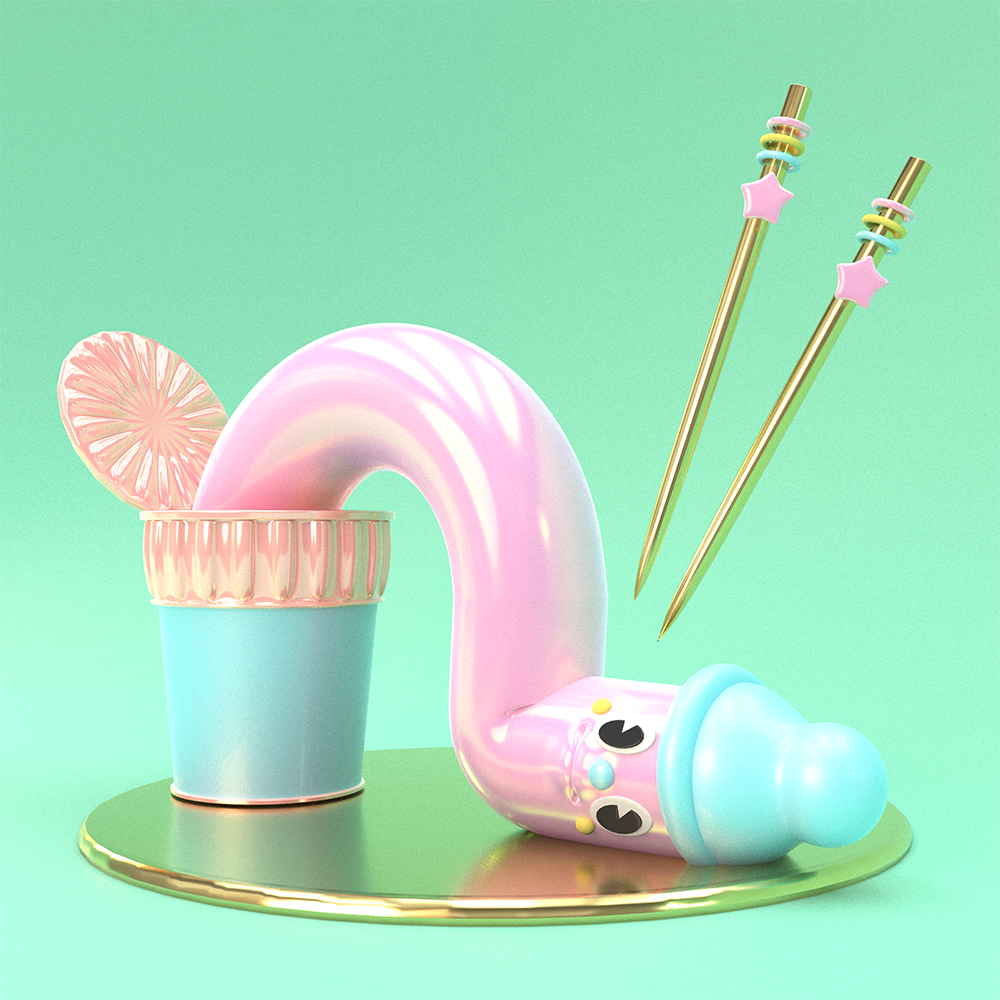 Your philosophy on art making seems to be deeply influenced by relationships you have fostered, individuals you have met, and a yearning for community. How does this translate into your actual practice? Who are you making art for?

I like that question because it's never actually occurred to me how prevalent that is in my life. A lot of the people that I've encountered in my life are constant sources of inspiration to me. I like to bounce ideas off other people and just get excited about concepts and colors and whatever project they, or I, am working on.

Being an artist can be an incredibly lonely pursuit, so it's important to me to be surrounded by like-minded creative folk whose kind words encourage me to explore and create. Sometimes I have my doubts about creative practice, and my life in general, and my friends are always there to remind me why I am doing what I do.

When I first started out I was fresh out of high school and didn't know many people in the art scene. I only really had connections from high school and I would always pester them to do events with me. I didn't have Facebook or Instagram for my art at the time, and was just being a loner making things in my bedroom listening to David Choe podcasts hoping someone would notice my work.

Thankfully that didn't last too long. I was always pretty shy with my art when I was younger because I knew it was kinda crap, so I put in the extra hours to become better and build the confidence to put myself out there and start doing events and making new friends.

The audience for my work is fairly broad. It's easy on the eyes and easily digestible and it's supposed to make you happy. I like to make art for anyone's inner child to enjoy for 15 seconds. I like to think that it encourages people to be more playful, less serious. 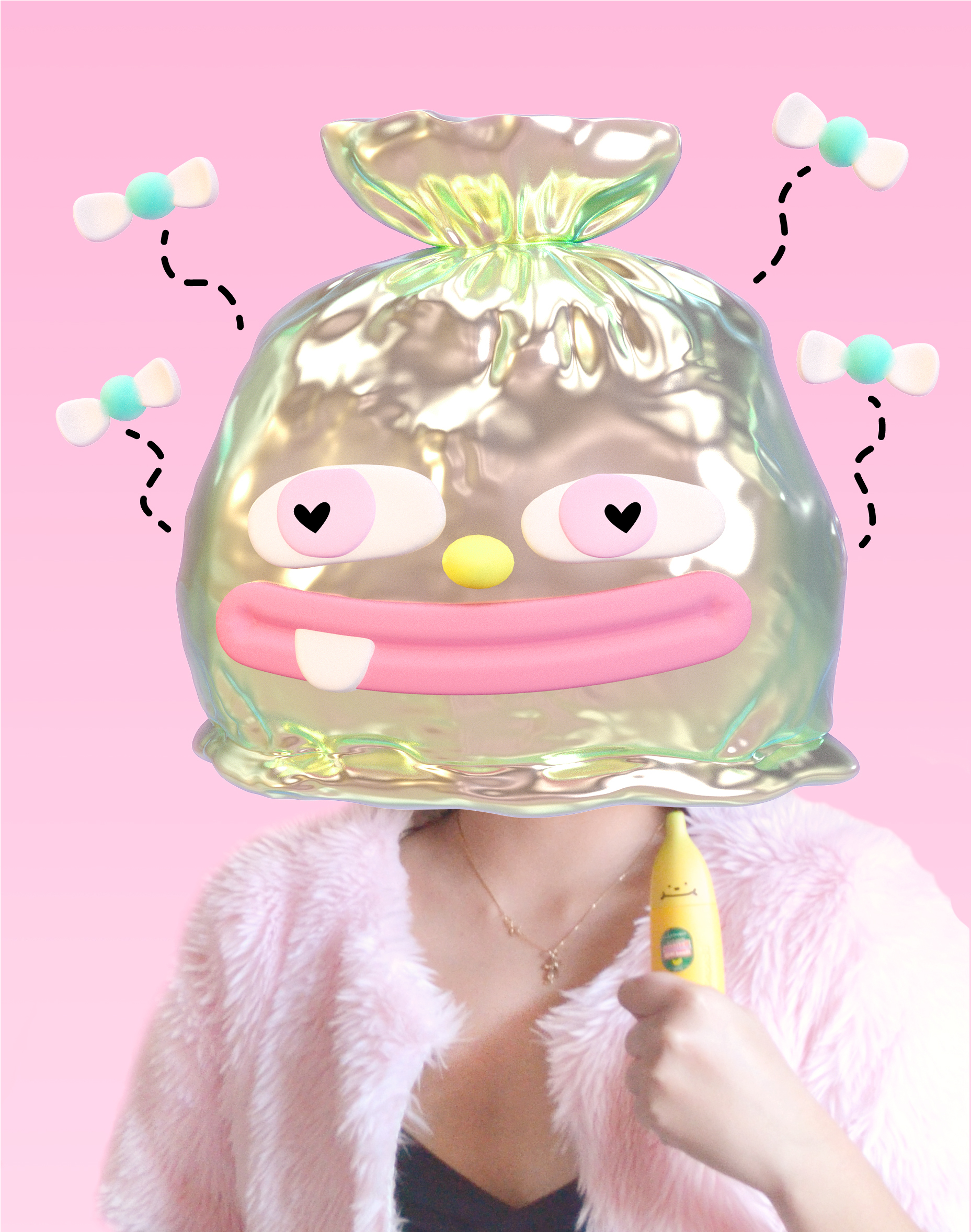 The recurring trope of the banana in your work is so compelling and just funny. I love that you have managed to redefine this otherwise trendy phallic fruit as an icon of your own. What is up with the banana?

I think part of the reason why I like it so much is because it's phallic and funny and yellow and nutritious and goes really well in a smoothie.

My obsession with bananas started last year when I was in Singapore and a special friend of mine gave me a banana shaped hand cream as a going away present.

Naturally, I drew a face on it and it brought the banana to life. It's definitely one of my favorite things now and it sits on my desk and I look at it every day—so I guess the image of a banana has become burned into my mind. It also reminds me of my friend, which is nice. She was the person who showed me some 3D works by Bart Hess which encouraged me to pursue 3D as a medium. 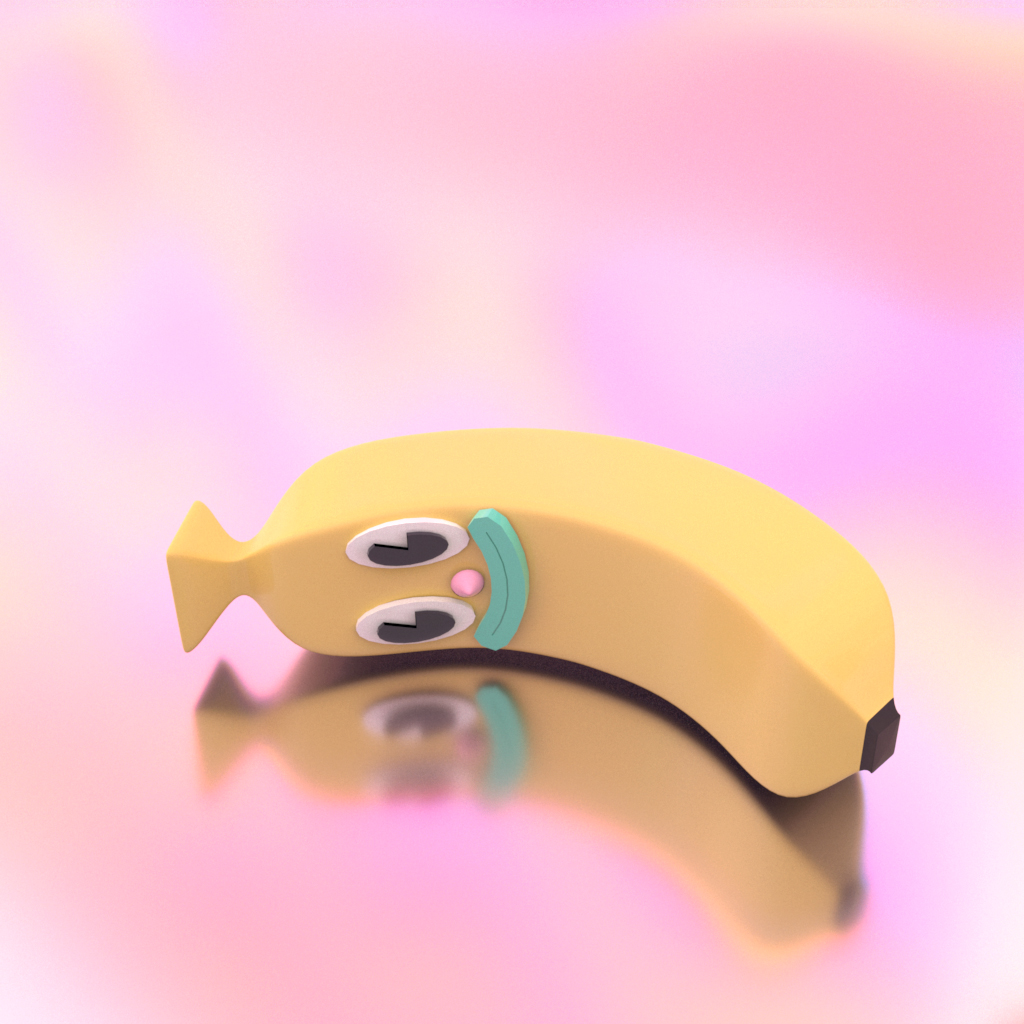 So, how would you situate your practice? I mean, it easily recalls cartoons, skate culture, street art, 90's nostalgia, lowbrow, and pop kitsch—how do you define your work?

I don't like to pigeonhole myself as a specific type of artist because I don't want that label to limit the boundaries of my art practice. I like to jump between styles and mediums to find a happy middle groundit keeps things interesting and prevents me from burning out. It also encourages experimentation.

Definition of my work? If someone put cartoons, skate culture, street art, 90's nostalgia, lowbrow, and pop kitsch into a blender, put it on blast, made a really nice smoothie, and then put a curly straw, some whipped cream, and sprinkles into the glass.

What's the 3D art scene in Canberra like? Or even, Australia at large?

It's like, kinda here in Australia, but not really. I don't know many 3D visual artists in Canberra - other than the ones I study with. They lean more towards game art than design and visual art. I think Australia's 3D art scene is a little bit behind. There aren't many 3D Australian artists that I know of but hopefully that changes soon!

You have already accomplished so much. What's next? Long term?

Okay, I usually don't like to talk about it in case I curse myself, but one day when I am able to freelance full time I would love to have my own creative co-working space with a Riso printer and gallery and cafe and a dog with my friends and it would be called Cream Team Studios.

It would be an absolute dream of mine to be able to support myself through freelance and not be broke as f**k.

When I become more comfortable with 3D I also want to create some kick ass installations and visuals and explore projection mapping. Maybe take a dip into some gallery shows, installations, digital conventions, create virtual experiences. A bit of everything I guess? I want pieces of all those pies.

I plan to be in the creative industry for as long as I am alive so I guess I gotta take it slow and smell those roses and learn things. In the meantime, I just want to keep working with 3D and see where it takes me. You know, float like a little garbage bag and go on an adventure.

Do you have any immediate goals or projects you are working on?

My immediate goal would be to learn more about motion graphics, animation, and projection mapping. I like the blur between reality and virtual worlds so it would be fun to experiment with that. I'm not working on any specific project at the moment, just focusing on familiarizing myself more with software and keeping my head above water at school.