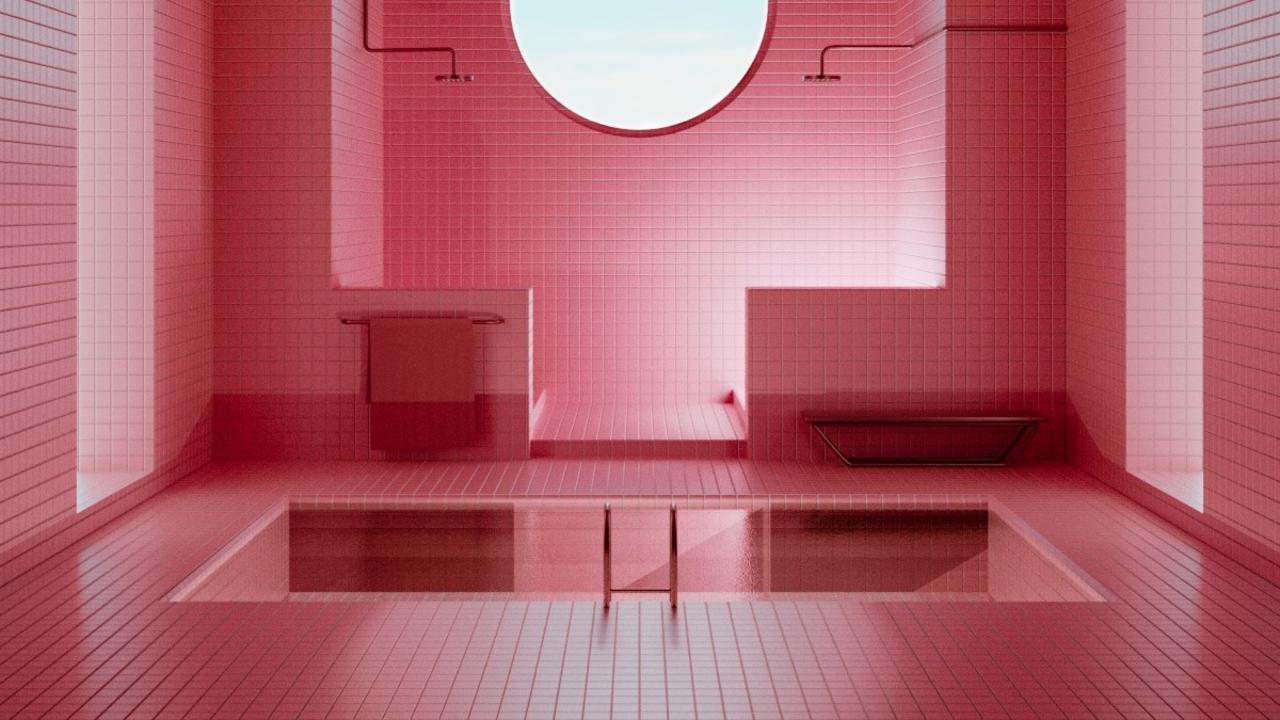 Circular Brutalist windows filter soft daylight across the tiled interior. Before us, a pale pool languidly stretches out of sight, transforming the room's concise architectural verticality into undulating columns of pink.

A writer, wine maker, and self-trained artist based in Cape Town, Alexis's practice is similarly wrought by these romantic faculties. Informed by five years of insular self-guided learning, his distinct aesthetic gesture has garnered him a number of recent commercial projects and gallery exhibitions.

As a contemporary artist whose interest in 3D was manifest in film script writing, Alexis embodies a sublime culmination of creative pursuits, the kind which helps facilitate the advancement of this medium. To hear more about his aesthetic inclination for swimming pools, regimented 4D working-practice, and his fears of impending digital antiquation, read on.

Your work is so compelling! How did you get into 3D rendering?

Well, I was working in advertising as a copywriter and I was also trying to write on the side—trying to write film scripts. I was taking on this quite mammoth task with writing and it stopped being a fun creative outlet. It started becoming this sort of, like, black cloud over my head.

So I was trying to find something else as an easy creative outlet, something I didn't have to take so seriously. One of my friends had just designed himself a coffee table in SketchUp and I sort of looked at that and it suddenly blew my mind that he could do that because he's a sound engineer. Suddenly I was like oh sh*t, I could probably get into this. Very slowly over four years I started just like, playing around with software and trying to figure out new things, looking at what other people are doing, and trying to reverse engineer what people had done to try and get my head around things.

In February or January this year, I had a bit of a general life redirection where I stopped messing around and decided to do things properly. I decided to concentrate, really concentrate, and see what would happen if for a year, I committed to making something every second day to post and just see what happens after a year. So I've got till like February next year. So you're halfway through this intensive self-guided working practice. I love that. Have you seen a change or a marked difference in your work style or aesthetic since starting this in February?

Yeah, it's quite crazy! I've improved probably more in the last four months than I had in the four years that I was playing around in it. Like, all of the things that I was kind of scared to do, now I kind of just do. And I've picked up quite a bit of work, I mean, people are hiring me for the weirdest stuff—and I had an exhibition last month! So yeah, it's quite crazy how when you just put your head down and start working, it all sort of manifests itself.

Right, a little bit of diligence! Now, there are so many references to art history, contemporary design, and the bauhaus in your work—what are your influences? Or is this all sort of self-initiated?

Yeah, I mean, I'd have to be a little bit of a weirdo savant to make this stuff all myself! But, I guess it comes from a myriad of different influences. I look at quite a lot of architecture. I'll turn to Baldessari, and the famous Modernist's have always sort of stuck out to me, but I don't draw on one in particular.

I've always done it like this: I kind of look at a whole bunch of different things, close my eyes, and then try and put something out, try and recreate something that's in my memory, because then I know it won't look exactly like the thing that I'm trying to recreate. Yeah. Which is a good thing! So I guess that's kind of the way that I work. And then I also pick up quite a lot from just walking around my city, looking at the architecture. We've got a lot of scattered brutalist relics lying about Cape Town with those big circular windows.

But I always try and blend [my work] with this feeling of being on holiday, in a way. There's lots of swimming pools, which is something that a lot of people can relate to—wanting to have a pool in their backyard. Or of dreaming of this quite fantastic swimming pool. That's interesting because there are so many allusions in your work to people either being invited into these spaces, or having just left. The repeated inclusion of chairs and carefully draped cloths and towels. It definitely reinforces that feeling of desire to be in that space.

Yeah, someone once asked me why I don't put people in my spaces. But I think that there's a technological reason; I think that 3D people look kind of weird! There definitely is a place for that, like, a lot of people are using 3D models and pushing a certain aesthetic, whereas I try to keep it clean and minimalist. That's why I kind of just have these hints at people having been there.

There's a lot of ideas I still want to work on, but I also am quite aware that with 3D stuff, things can date very quickly if you don't do it right. It's actually one of my big fears. And not "date" like stylistically even, but technology wise.

Absolutely. Do you feel like you are trying to, in that way, create some sort of an atemporal style that would read as both contemporary and, in future years, still modern?

I think so. Although I am aware of the fact that I use colors in my renders that are quite trendy. You know, sort of "fashionable" or whatever, which I try and be sort of mindful of. But yeah, I guess I am trying to figure out how to make something that'll last a little bit longer because when I look at 3D renders of people that I like on Instagram, and I go and look at their page, and then I just scroll back like, two or three years and look at their stuff, it often strikes me how stuff ages quite quickly. And I might have looked at it back then and gone aw sh*t, this is amazing! Right, and now it seems antiquated.

Yeah! Which, I don't know, I guess it is fine but it's like—for me it's just quite jarring. Like, if you look at early electronic music, the equipment wasn't that advanced and made these very rudimentary sounds, but even that hasn't dated as much as the visual version of it.

But it's interesting because you've got these two things, you've got trend that's dating and changing rapidly. Like, every time you look on Instagram the "trend" of what people are doing in 3D has changed from month to month. And then you've got this technological aging. So it's quite interesting.

Certainly! It's a fairly volatile medium to be working in right now.

Yeah, and I think a lot of people aren't taking it that seriously because of that so, I'm trying to create something that blurs the lines a little bit. And that's also why I do a little bit of "post" in my work as well, just to kind of literally blur some of the lines.

Your work does read very photographically. Do you look at photographs for compositions?

I do! I mean at the moment, because I have to work so quickly—and you won't believe how quickly. Like I don't know how people do daily renders. It blows my mind. But I do try and sort of look at photos for inspiration. I end up just looking at photos of architecture, and for help with angles.

But I guess the lovely thing about 3D is—and also kind of damning at the same time—it's like the digital camera. You can take like, a million different angles and then also not be certain about which one you like because you've got all the options. Which, is a dilemma. But if you look at my renders a lot of them are just shot front on. You're self taught. Do you have an online resource are a community that you confer with?

Yeah, kind of. I've sort of steered away from message boards for asking questions or anything like that. I've really just tried to do my own research and watch YouTube videos and not create dialogues with people while learning. It's been a very one sided learning endeavor for me, up until earlier this year when a friend of mine moved back from the UK—he does this for a living—and he included me in a group with some guys, then the dialogue started.

And then suddenly my skills like shot* through* the roof. I could suddenly ask questions and feel confident about what I'm doing. Yes, so now I'm kind of a part of this slack group with a bunch of guys I ask questions with.

But other than that I don't really know anyone else that does what I do in my town or my city, so it's pretty much connecting with people overseas and like the one or two people that I have here. Yeah, it does seem to be a very "online" conversation—this medium, which is exciting, but also breeds that kind of isolation. But it is interesting in terms of people developing very specific stylistic tendencies.

Yeah, for sure. I totally agree with you.

Are you working on any commercial projects right now?

No and I'm not. I just did a little animation for someone. And yeah, I also have another full time job. Yeah! Well my dad has a small winery where we make MCC—It's basically like the South African version of champagne. So we make sparkling wine and that's my day job—running a small little sparkling wine farm. It's sounds so bourgeois! But yeah that's what I do to keep the bills paid while I play around in 3D programs. Do you ever hope to work with 3D full-time as a designer and artist?

No. I still want to make wine. I still really enjoy making wine. And I don't know, I tend not to think too far ahead or try and get ahead of myself. But I guess that's also a goal, not getting ahead of yourself.

Right now I just want to kind of get to February of next year and see what happens if I keep [making work] for a whole year, every second day, and then figure out what's next. It might sound a bit shortsighted but it's sort of like, quite task oriented, to finish what you're doing and then think about what's going to happen next.